Recently on the Acquarius website we have mentioned a lot about cryptocurrency and how the Government of Gibraltar are really pushing ahead with this tech to get ahead of the game. Well I came across an article today which seems to suggest that “blockchain” tech, the very basis of the bitcoin revolution could already be obsolete as the new Hashgraph tech bids to take over.

What is Blockchain Technology?

Considered the greatest technological innovation since the internet: Blockchain technology emerged in response to the collapse of several banking institutions in 2008 with the release of a whitepaper by Satoshi Nakamoto titled: “Bitcoin: A Peer-to-Peer Electronic Cash System.”

Blockchain is simply a database that is public (no one owns it), distributed (no centralized server), is continuously updated, and is secured by the art of cryptography.

This is why Jamie Dimon is freaking out. Banks will soon be obsolete.

What is Hashgraph and Why is it Better? 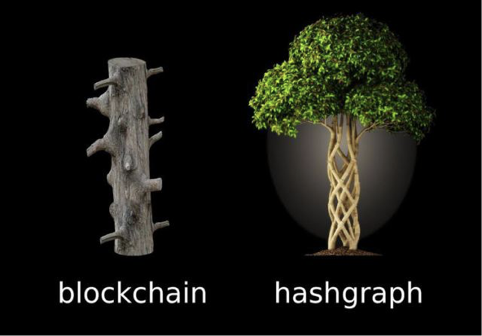 Hashgraph is a superior distributed ledger technology system that eliminates the need for massive computation and unsustainable energy consumption like those of Bitcoin and Ethereum.

Most importantly, it is able to reach a consensus. (I’ll explain why this is so critical)

As of now Bitcoin is limited to 7 transactions per second.

•More Fair: mathematically proven fairness (via consensus time stamping) meaning  no individual can manipulate the order of the transactions.

In the blockchain world, a miner can choose the order for which transactions occur in a block, can delay orders by placing them in future blocks, even stop them entirely from entering the system.

Consensus time stamping prevents an individual from affecting the consensus order of transactions.

Once an event occurs, everyone knows about it within a couple of minutes. Only the effects of the transaction are necessary in storing, everything else can be discarded. This shrinks the amount of storage currently needed (Bitcoin: 60GB) to a fraction of 1GB, allowing a smart phone to now act as a node.

•Improved Security: Asynchronous Byzantine Fault Tolerant: No member can prevent the community from reaching a consensus, nor can they change the consensus once it has been reached.

With Byzantine, a consensus can be reached, whereas in the blockchain world, it is only a probability that increases over time.

If no consensus is ever reached, conflicts will always occur. This is why hard forks that result in alt coins, such as Bitcoin Cash and Bitcoin Gold are occurring.

In the blockchain, transactions are put into containers (blocks) that form a single, long chain. If two miners create two blocks at the same time, the community will eventually choose one and discard the other.

In hashgraph, every container is used and none are discarded.

•Inexpensive: avoids proof-of-work (PoW), meaning it does not have to waste computations to slow itself down, therefore the expensive, custom hardware is no longer necessary.

In the blockchain, if new blocks arrive too quickly they can be discarded. This is why Bitcoin is currently PoW, as this artificially slows down the mining process – hence the expensive hardware needed to mine.

With hashgraph, every member can create transactions and containers whenever they want.

Update: A message left by the Hashgraph team that explains a bit better on how their platform technically works:

Note that we are our own consensus algorithm. While Ethereum is looking at PoS with Casper, our algorithm uses something called Virtual Voting – its a voting system – without having to do the votes. Hashgraph uses a protocol called “Gossip about Gossip” to achieve consensus. Gossip is a well known computer science term, which can be defined as calling any random node and telling that node everything you know, that it does not know. In distributed ledger technology the “baseline” or minimum bandwidth required is that the transactions go to every node. Gossip about Gossip refers to attaching a small additional amount of information to this Gossip, which contains the last person we talked to, hence, we are gossiping about the information we gossiped. Using this information, we can build the Hashgraph. Once we have the Hashgraph, it is extremely easy to know what a node would vote, because we know what each node knows, and when they knew it. We now can use the data from the Hashgraph as an input to 30 year old voting algorithms, and achieve consensus essentially for free. These 30 year old voting algorithms have strong math proofs- they are Asynchronous Byzantine Fault Tolerant, which means we know when we will achieve consensus, guaranteed, and our math proofs make no assumptions about the speed of the internet, due to firewalls, ddos attacks, viruses or botnets. In addition, because of gossip about gossip, Hashgraph is extremely fast, (250,000 transactions/sec), and we also get fair ordering and time stamping on every event. Take a peek at the video from Squawker below if you need more.