I’ve just spent two days in a crypto/blockchain/ICO conference and whilst for me enjoyable the buzz around the whole phenomena is such that everyone I know is either talking or asking about it. So here is a very simple guide, in practical terms. No analogies. Just basic facts that anyone can understand about blockchain and crypto. This will not be comprehensive but will offer a real world insight to the cryptocurrency world.

To quote an oft thumped book …. In the beginning was the word and the word was …

This person (or group of people) that no one knows, designed “bitcoin” the first digital currency. In order to implement this coin he also had to create the blockchain (more later). He wrote the “whitepaper” which outlined the digital coin entitled “Bitcoin: A Peer-to-Peer Electronic Cash system”.

In order to make this virtual currency work Satoshi had to develop and overcome one real problem. How to stop anyone spending their virtual coin twice. With a physical coin you literally hand it over. In a bank the coin is removed from your spreadsheet and handed to the receivers spreadsheet. Satoshi didn’t want banks involved they are easily hacked, he wanted decentralisation and a transfer of currency with little or no cost because computers could do it automatically once you pressed send. Satoshi needed a database that is not controlled by any one person yet remain secure and “hack free”.

The first cryptocurrency version 0.1 of the software was release 9 January 2009. It is software like on your home computer or tablet because bitcoin is not physical it is a digital thing on a computer. This sounds whacky but even the money you have in your bank account isn’t real these days it is merely numbers on a spreadsheet. 1 bitcoin (BTC or XBT) is comprised of millibitoins (mBTC), bit (b) and satoshi (sat). A satoshi is the smallest amount within bitcoin representing 0.00000001 bitcoins, one hundred millionth of a bitcoin. A bit equals 0.000001 bitcoins, one millionth of a bitcoin or 100 satoshis. A millibitcoin equals 0.001 bitcoins, one thousandth of a bitcoin or 100,000 satoshis. Suffice to say if you had bought bitcoins in 2009 at 12 cents a coin you could have gotten plenty, currently they are at over $11,000 which means $100 worth of bitcoin then would be worth over $9,000,000 now!

Step forward blockchain developed as a database but unique in the way it is handled. The coding for blockchain is “open source” in other words anyone can read it and check it for errors BUT the significant thing about this database is that it is not in any one place. It is on any computer that wants it or needs it. These computers are called “nodes”. The blockchain itself is a series of blocks each one containing a copy of the database and a group of transactions. The block is “confirmed” when these transactions have been verified by the nodes. As each block is confirmed it goes ahead of the previous block which also means the previous block is confirmed a second time and so on. Each time making the verification more secure. Thus the blockchain is formed and every node on the network has a copy so no one node can change the blockchain because it wouldn’t get verified or confirmed. These unverified blocks are called “orphans”. 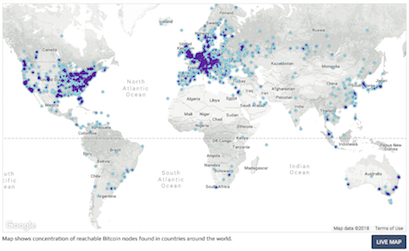 Any computer in theory from an ipad, tablet, laptop or PC with basically the bandwidth and around 145GB of storage can become a node. All you have to do is download “Bitcoin core” and get on the network. The number of nodes does change up and down on the blockchain perhaps because a computer is offline or has shut down but the entire network of nodes however many there are must agree a transaction to confirm it. There are different types of nodes BUT for the purposes of this we shall ignore the other types.Once all the nodes have agreed the next “block” in the blockchain is put into place. At one point there were roughly 8500 nodes latest data from Feb 2018 has it at around 6000. The issue is it does take power and many nodes will not earn money from “mining” so in essence they work for free. People around the world who want to see cryptocurrency succeed usually have nodes like this, altruism is alive and well in cyberspace. In terms of location the USA has the most bitcoin nodes currently as you can see by the dots on the image. The EU is probably next with the parts of the world clearly interested in the tech behind that. It would be fair to say depending on the coin that a country offering a coin would clearly increase it’s nodes to help the launch of the coin, Venezuela for example with the “Petro”.

This is easy to explain. Nodes compete to create the next block in the blockchain to do this they must have all the data required and solve the “magic number” first. If there is a consensus that node will place its block into the blockchain and it will be confirmed and they will receive a small amount of cryptocurrency as payment. Once blocks are in place and others are attached this cannot be altered.

The magic number isn’t really magic but it is the identifier of the block it is an equation that has to be solved and the first miner to solve it gets the dinero. This number also holds the date/time stamp of this particular block how this is derived is moot unless you really want to learn about blockchain and the algorithms used.

If you are interested then there are sites like coinbase.com or Binance.com where you can trade crypto for fiat (normal currency) and back again. That should be enough to salve the curious on the basics of crypto but there is always more to learn in this ever expanding field. If you need more drop me a line at info@cruzlaw.gi. Furthermore if you are in need of in depth fintech advice drop us a line or look at our website CruzlawLLP.